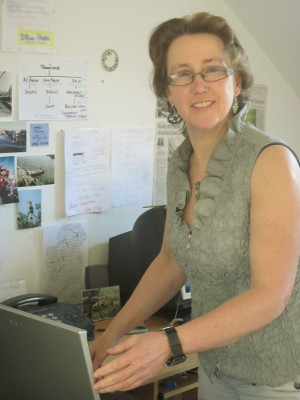 Irish Genealogy Services was set up by Georgina Scally. Georgina’s background is in heritage where she has spent over 25 years working in Ireland as a self-employed, professional archaeologist carrying out large and small scale excavations and research assignments in many different parts of the country.

Georgina has worked for private developers, research institutions and the state Department of the Environment, Heritage and Local Government.  She has published a number of articles and pamphlets and her book High Island (Ardoilean), Co. Galway: Excavation of an Early Medieval Monastery, was published December 2014.  She also lectures occasionally.

Coming from such a background, Georgina has an in-depth knowledge of Ireland.  Her primary degree (B.A. Archaeology and Geography 1982) was followed by a Masters in Urban and Rural Planning and later again, in the 1990s, she commenced a Masters degree in Local History but due to work and family commitments, she was unable to complete her studies. However, her interest in Local History did not diminish and a decade or so later she completed a Diploma in Genealogy and Family History in Dublin, where she was awarded a first class Honours (with distinction).  Since that time Georgina has been carrying out genealogical research on a full time basis for clients worldwide.

Should you commission Irish Genealogy Services to undertake research on your behalf, it will be carried out in accordance with our code of professional practice. All information supplied to, and uncovered by us, will be dealt with in the strictest confidence. No report or any part thereof will be copied, replicated or circulated to anyone other than the commissioning client.

Georgina has a track record of professionalism and integrity and all work is carried out on this basis. She lives close to the heart of Dublin city within walking distance of the major genealogical research institutions and repositories. Her interests are manifold and cross cultural, social and geographical boundaries however, commitment to a job well done remains a priority.

The Irish Genealogy Services logo is a unique design created by Georgina.  The capital letters IGS representing Irish Genealogy Services have been worked into a stylised boat resting on a bed waves representing the sea journey taken by millions of Irish people either forced or voluntarily emigrated to make a new life in various parts of the globe.  The diagonal lines within the boat represent the musical heritage the emigrants brought with them as they departed Irish shores, a heritage for which Ireland and its people are still renowed to this day.  The stylised leaves represent growth of new generations created by these brave people in their adopted homelands across the world.